A RISING STAR IN THE NORTH – PORT OF KAIPEDA

Klaipeda is the largest port town in Lithuania, one of the major harbors in the region and has in recent years become the largest port by turnover, and the northernmost ice-free port in the Baltics. The seaport handled 46.3 million tonnes of cargo in 2019 and is preparing for a major expansion during the next five years.

At the end of January 2020 NIB (Nordic Investment Bank) and the Klaipeda State Seaport Authority signed a 19-year credit facility agreement for infrastructure investment in the seaport for a total amount of €136 million. It is projected that Klaipeda annual capacity would increase by 29% of its current capacity, which characterises it as highly attractive and strategic transport hub amongst the ports of the North.

With the increased demand from both, passenger and cargo companies the expansion project phase 1 is to deepen the port entrance channel. At present, the port north section makes possible to load vessels limited to a draft of 13.8 m, while the south section could handle cargo ships with up to 13.4 m draft.

The design for seaport deepening to 17 m would provide handling of cargo ships with a draft of 15 to 15.2 m. The second phase work will be concentrated towards the Klaipeda breakwater facility reconstruction and fortification. Currently 100 days of the year are not utilised in cargo handling due to the bad weather conditions. The planned fortification work is to facilitate the reduction of bad weather effects and guarantee the safe manoeuvres of vessels longer than 250 m.

Typical 2014 breakdown of cargos processed at the seaport comprised of fertilisers (33.3%), petroleum products (16.1 %), containers (15.6%), ro-ro (12.2%), agricultural products (7.2%), construction materials (3.6%), ore (3.3%), metals (1.4%), wood (1.1%) and others (6.2%). At the moment, the intensity of usage of the cargo handling port facilities and the land adjacent is calculated at five times higher levels that 2014 and naturally the efficiency is to be provided via the seaport expansion. An example of the ambitious design is for increasing the annual turnover of containers form 0.75 million, currently, to 2 million at 2023. The 46.3 million tonnes of cargo handled today is to become 57.4 million tonnes at completion. A multipurpose, deep-water port with ship building facilities and a repair yard, Klaipeda connects East and West via land, railway and sea. The strategic plan discuses goods movements on the ‘’new silk road’’ between Alma-Ata (Kazakhstan) and Klaipeda in 5 – 12 days via rail, and similarly between Klaipeda and Chongqing (China) in just 13 -18 days. The grand scheme utilises the Trans-Siberian Railway Network, connecting already Moscow and the Russian Far East, the Trans Asian Railway
(TAR) and the Transport Corridor Europe-Caucasus-Asia (TRACECA).

Goods transportation from China to Western Europe and Scandinavia envisaged as per fig.1 below. 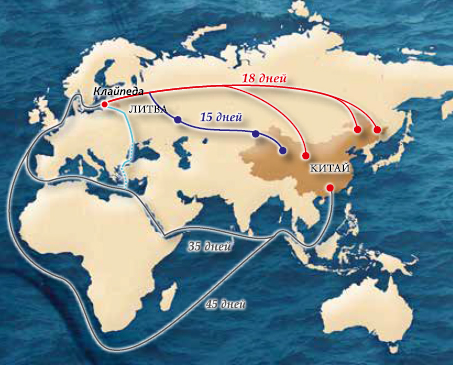 European and Asian transport arteries – road and rail as per fig.2, and fig.3. 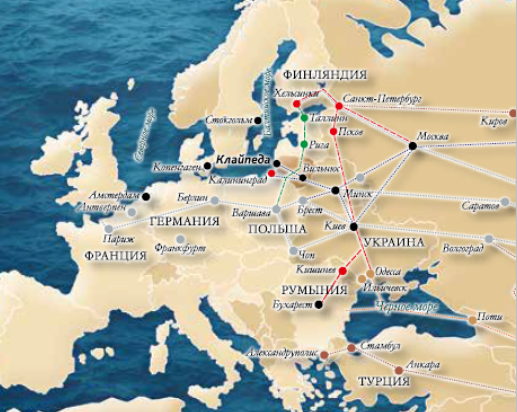 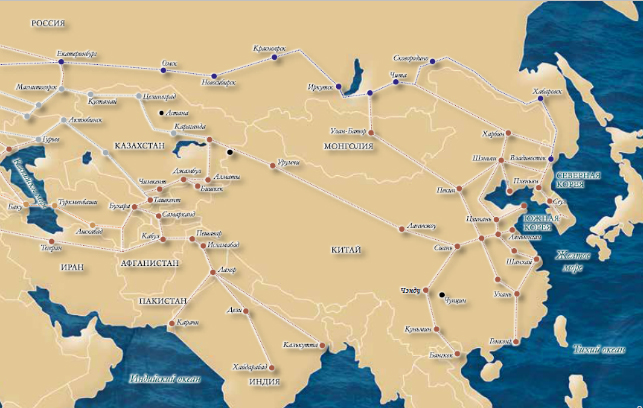 It has been commented by both, the US and Russia, that with the Arctic circle warming up, there is great opening for new navigational routes and access to oil and mineral reserves in the region. And with the increased interests towards the Arctic highlighted in the new initiative framework of the Chinese president many Arctic countries are rightfully alarmed.

As per many European strategic investments where Chinese companies have approached and succeeded in securing (sometimes major) stakes in ports that are financially troubled, Klaipeda Seaport Authority have experienced some of these influential Chinese propositions as well.

The call for consideration of threat to the national security, however, highlighted by the Lithuanian President at the end of 2019, has led the state port company to seek a new major investor and at the beginning of 2020 securing the deal with the Nordic Investment Bank. It is time now to watch for the rising star amongst the North seaports – Klaipeda.