HOW AND WHERE TO FIND ROBINSON CRUSOE ISLAND

For those of you with a spirit of adventure who long to travel to far flung places beyond the familiar hot spots, who want to get away from it all and experience the excitement of exploring those less familiar and remote destinations and who may feel inspired to log their adventures in a travel journal; then the Juan Fernandez Islands lie in wait for you.

This small island archipelago was named after the Spanish explorer Juan Fernandez who discovered it in the 1574. In fact, Juan Fernandez came across the islands trying to solve a logistics problem and fighting the powerful north flowing Humboldt current; a voyage south from Panama to Callao (to a port in Peru) in the South Pacific Ocean would have been a three-month ordeal.

Since around 100 Spanish ships were at work taking silver from Callao to Panama and making sure that there is a constant flow of precious metals further to Madrid, it was easy to travel northbound. The tedious journey though included the passage from Callao to Valparaiso (the port of Chile); once Juan Fernandez discovered the islands on the 22nd of November 1574, the new route shortened the cargo vessels voyage South from three months to one.

The Spanish, however, did not add the archipelago on their charts as, at the time, the South Pacific ocean was criss-crossed by English predators and legalised privateers, namely Sir Thomas Cavendish, Richard Hawkins and Sir Francis Drake, who attacked the ports of Peru only relying on Portuguese maps and his skills to acquire pilots and cartographic intelligence.  The first British chart edition of the archipelago dates to 1675 by John Seller publishing house of London and the ‘’Chart of the South-Sea’’ had the backing of the King with a royal warrant. 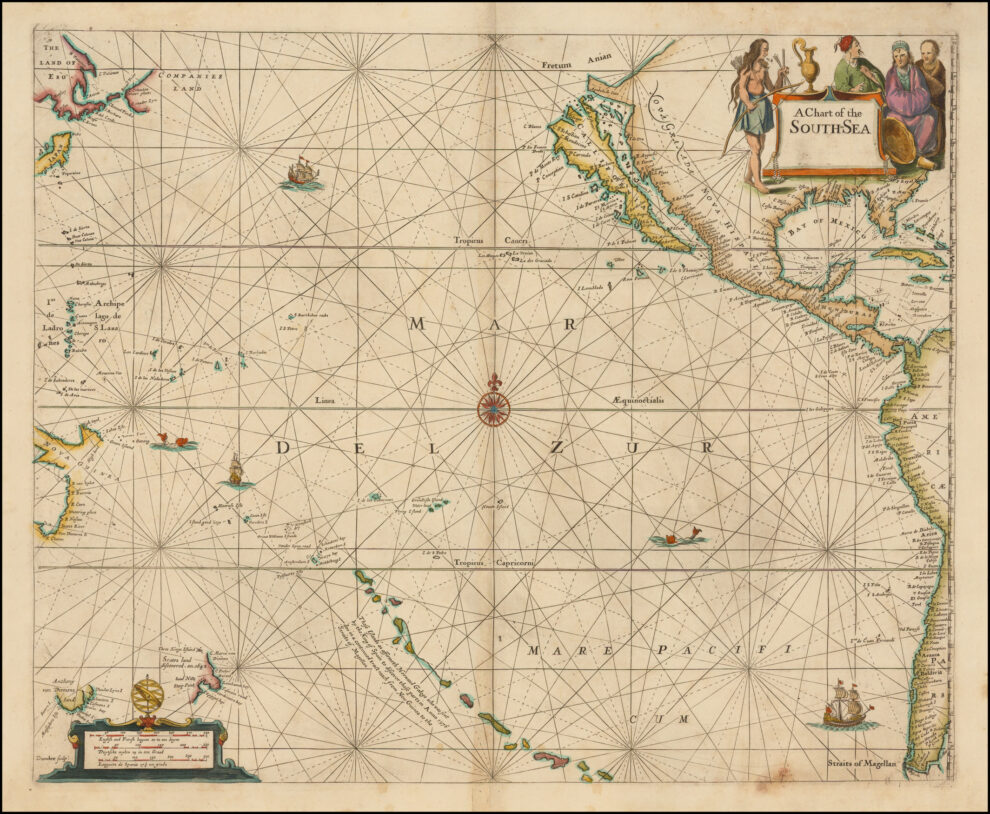 A Chart of the South Seas 1672, 1st Edition and the First British chart of the Pacific Ocean

The archipelago, lying due west, approximately 670 km off the coast of Chile is comprised of three islands named Santa Clara, Robinson Crusoe and Alejandro Selkirk. Santa Clara sits 1.5km southwest of the Alejandro Selkirk island and is the smallest of the group, about 2.2 square km and is mainly flat, barren and mainly formed of volcanic rock with coral reef surrounding to the south. Lying to the east of Santa Clara sits Robinson Crusoe Island, formerly known as Mas a Tierra and is the second largest in the archipelago.

Centred at about 33°38’ S and 78°50’ W is the bay, named now Cumberland Bay on the North side of the Robinson Crusoe island, where the sailor Alexander Selkirk landed and was marooned from 1704 to 1709. The Scottish Royal Naval officer spent four years as a castaway after being left on the island by his captain.  As legend has it, the ship he had been sailing in had stopped at the Juan Fernandez Islands for supplies, but when the ship was due to leave Selkirk deemed the vessel was no longer seaworthy and was in need of repair.  He had wanted to stay on the island and mend the ship rather than setting sail again in what he considered dangerous transport.  Unfortunately for Selkirk, the captain took him at this word and left him there alone.

Selkirk’s time on the island was hard, he was extremely lonely, full of remorse and bitterly regretted his decision to stay.  He would scan the coastline daily in the hope of spotting a ship and being rescued.  However, although his surroundings were unfamiliar and hostile, he proved to be a resourceful castaway by living off the meat and milk provided by the native goats, and by eating the fruits and vegetation he found there.  He built himself some huts to live in out of pepper trees and made clothes out of goatskins. His Bible was a source of comfort to him and he spent much time reading from it and singing psalms.  Eventually he was rescued by a privateering ship in 1709.