JOHN WASHINGTON – HYDROGRAPHER AND FOUNDER OF THE LONDON GEOGRAPHIC SOCIETY

Captain John Washington succeeded Beaufort as Hydrographer. He had been actively employed in the hydrographic service since 1841. He had recently, just before the outbreak of the war, visited Denmark, Sweden and Russia ostensibly in connection with the Lifeboat Service, but had taken the opportunity to gather intelligence about the Russian Baltic Fleet and their coastal defence.

This intelligence was followed up and augmented by the efforts of Captain H. Sullivan whilst on the paddle Surveying Vessel Lightning, first in the approaches to Bomarsund, and then at Sveaborg and Kronstadt. In the Mediterranean and the Black Sea, Thomas Spratt, who was serving on the Spitfire, another of the handy steam paddlers, provided equally important service on both the Black Sea and the Sea of Azov coasts of the Crimea. Spratt was employed and consulted constantly by the Commander in Chief, Admiral Lyon, during the war and at the peace was awarded the CB and promoted to Captain. Important bathymetry observations on the distribution of marine life were attributed to Thomas Spratt which elected him to a Fellow of the Royal Society.

Developments in the colonies led to surveying and charting arrangements with the India Hydrographic Office, which were still-borne on account of the abolition of the Indian Navy in 1862, and with the governments of the various states of Australia. For surveys along the coasts of New South Wales, Victoria, South Australia, Tasmania and Queensland the governments would provide for local expenses, while the Admiralty would pay the salaries of the staff engaged on them, provide instruments for surveying, and carry the production costs of the charts arising from the work.

The advent of the trans-oceanic submarine telegraph cable led to a call for deep sea soundings along possible routes. Washington appreciated that knowledge of the depths of the open ocean was not only desirable for itself, but that it could help to eliminate the numerous reported dangers with which oceanic charts were encumbered.

In the Office Washington decentralised more than Beaufort had done, and some of the back-log of material which had been built up was cleared into publications. The office staff grew and additional accommodation was built on in the form of another set of attics to the Admiralty Building. In November 1855 printing of the charts in house was stopped, and Malby & Sons took over this task, though the copper plates were kept in the basement of the Admiralty in Hydrographer’s charge when not in use. In 1860 the Stationery Office took over responsibility for the sale of charts, but within very few months found it too onerous and returned the task to the Hydrographic office, where it has remained ever since. 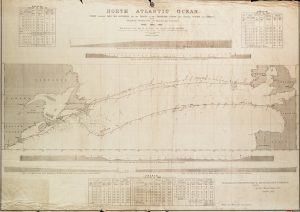 When the celebrated Menai bridge across the strait of that name was constructed, one of the conditions insisted upon by the Admiralty, was that all parts of its lower surface should be 100 feet above the Level of High Water (HW). The various arguments and circumstances connected with this, led to a special branch in the Hydrographic Office, being formed, termed to the Harbour Branch, to which an officer of the Royal Engineers was appointed under the Hydrographer. This branch was shortly afterwards turned over to the Board of Trade.

A number of cases of the loss of ships were attributed to shortcomings in the charts in the early 1860s. Though in most of these blaming of the Hydrographer did not stand up to close examination, they nevertheless preyed on Washington’s mind and his health suffered. He was still in office when he died, in May 1863. He was then a Rear Admiral and was aged sixty-three.