The shipping industry is in troubled waters, with sinking still surprisingly common. On average of 119 ships have been lost on the high seas each year over the past decade for a variety of reasons, according to insurance firm Allianz. Based on 2014 survey results the World Shipping Council estimates that there were approximately 733 containers lost at sea on average for the years 2011, 2012 and 2013, not including catastrophic events. Inclosing catastrophic losses, for these years, the average annual loss was approximately 2683 containers, an uplift of 297% from the previous three years.

Currently, there are about 51000 commercial ships on the ocean (not counting the passenger ships and tugboats), mostly cargo vessels transporting everything from fish fingers and fridges to cars and crude oil. We all depend on this industry – about 80 percent of the goods we trade go by sea.

This dominance is because ships move goods around cheaply, if slowly. Ships also emit less carbon dioxide than other modes of transport, but shipping isn’t without its dangers. Huge storms, mutinies, pirates and collisions can endanger ships and those episodes and in disaster more often than we think. 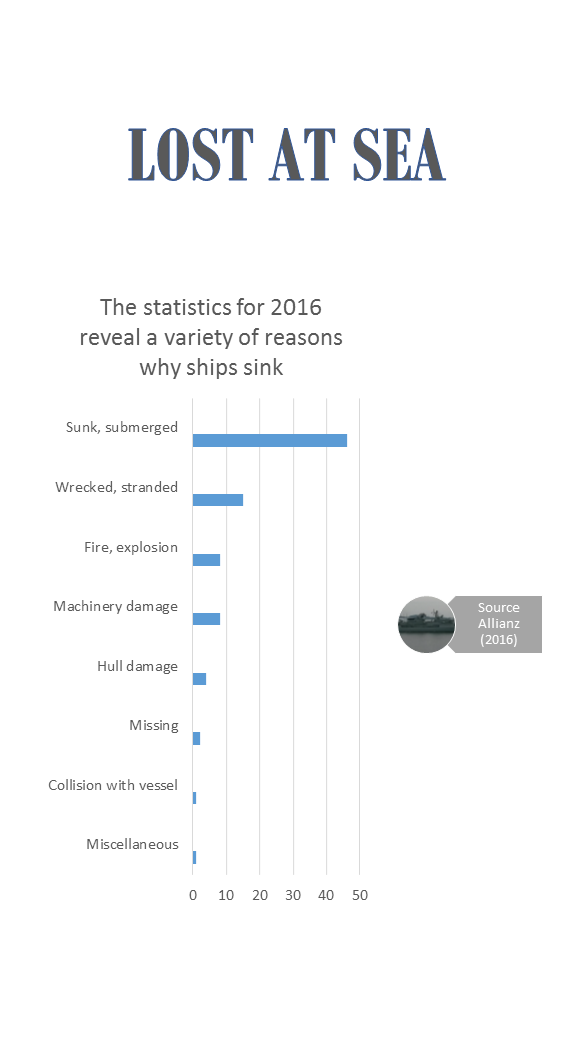 The Stellar Daisy wasn’t quite half way across the southern Atlantic when her crew heard a loud bang and the ship suddenly began listing badly – the ship disappeared in the waters rapidly, with a cargo of 260 000 tonnes of iron ore from Brazil on route to China. Despite a wide-ranging search, 22 men on board were not found.

At 320 metres long, it was classified as a very large ore carrier (VLOC), the largest type of ship that transports metal ore. Ships like this are not supposed to sink – certainly not in reasonably calm seas like the ones the Stellar Daisy was travelling in on the 31st of March 2017. Now, it is understood that liquefaction played a key role in the capsize, although Port State Control examinations concluded that the 24-year old vessel had a clean bill of health with no detentions.

Such cargoes that are at risk of liquefication are those containing some fine particles and some moisture – they do not need to be visibly wet. The most widely known cargoes with this hazard are mineral concentrates, although other cargoes can also liquefy, i.e. fluorspar, some grades of coal, pyrites, sinter/pellet feed, chemical fertilisers etc. Whilst transported at sea, cargoes are exposed to agitations such as engine vibrations, ship’s motion and wave impact, resulting in the compacting of the cargo. This reduces the spaces between the particles. If compaction is such that there is more water inside the cargo, the water pressure inside the cargo rises rapidly and can press the particles apart. In this way, the friction between the particles is reduced and the strength of the whole cargo is reduced. In such condition, cargo may fly from one side of the ship with a roll one way, but not completely return with a roll the other way, increasingly loading to a dangerous list and potentially the sudden capsizing of the vessel.

Sampling procedures for shippers and certification are obligations under SOLAS (The International Convention for the Safety of Life at Sea) – they are strictly mandated in the IMSBC Code 2011 (International Maritime Solid Bulk Cargoes Code). In short, the code requires

Prior to loading, the shipper must declare to the Master of Vessel in writing if the cargo may or may not liquefy. Submission for Laboratory testing is required to establish the material flow properties and the shippers must provide a certificate of moisture and of TML (Transportable Moisture Limit) prior to loading, regardless of whether (or not) the cargo is specifically listed by name or not in the IMBC Code as a cargo that may liquefy.

Chartering managers are responsible to ensure they conclude fixtures that do not put lives of seamen in jeopardy. They are often equipped with checklists such as the IMSBC Code pocket guide. Typical is Lloyd’s Register list pocket guide (Carrying solid bulk cargoes safely)

Implementing a sampling and testing regime that complies with the provisions of SOLAS and the IMSBC, however, is much more demanding task for unprocessed ores than it is for concentrate cargoes. For example, in mining locations at tropical countries with frequent heavy rainfall, cargoes are transported in open lorries and stored in open stockpiles, which leads to unpredictable increase of moisture.

In cold conditions, the formation of ice crystals in the cargo is a serious hazard. Voyaging to warmer climates may result in thawing and the possibility of the cargo exceeding its transportable moisture content, leading to sliding failure or liquefaction.

The main concerns lie in the failure to provide the true moisture content of cargoes and determine accurately the transportable moisture limit. It has been reported that masters and cargo surveyors have been physically threatened and intimidated to load cargoes quickly, without being given the time to carry out independent moisture content tests to confirm the shipper’s declared moisture content.